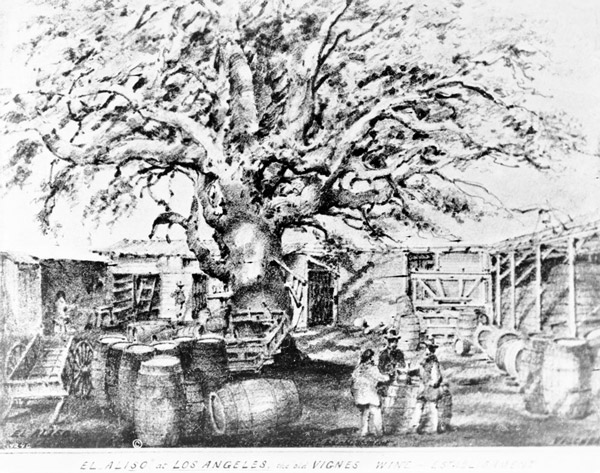 This is the story of the 400-year old sycamore that Aliso St was named for and which also used to be such a feature in early LA and, for a short time, of the Maier & Zobelein Brewery. The tree was 60 feet high and 200 feet wide, making it a dramatic landmark back in the era of single-story buildings.

It's on the right beyond the Plaza in this 1857 photo from Fort Hill: The tree was just to the east of the ancient Tongva village of Yangna (built on higher ground than the tree), but by 1837 the indigenous population of LA had been reduced dramatically, not in the least by syphilis and other European diseases, but also by bizarrely harsh treatment. In 1837 Frenchman Jean-Louis Vignes opened a winery under the sycamore, building some one-story frame buildings to house his business (and giving his name to Vignes Street). The El Aliso Winery, named for the tree, became the center of LA's Frenchtown, and shipped 150,000 bottles of wine per year.

Despite their success, the Vignes family sold out to German immigrants in 1875 who opened the Philadelphia Brewing Company on the site, reusing the frame buildings.

Seven years later, two more German immigrants, Joseph Maier and George Zobelein (the latter of later Eastside Beer fame) purchased the brewery. They replaced the frame buildings with a huge, multi-storied brick edifice in 1889. The tree, now severely pruned on three sides, remained at the center, providing shade for the wagon yard. However, in 1892 one of the El Aliso's remaining branches fell and crushed a beer wagon. In a fit of revenge, and over Zobelein's strong objections, Maier had all the branches removed from the tree, leaving only its trunk. By the end of the year El Aliso, which had been growing in LA since Columbus' first voyage, was dead.

El Aliso's lifeless trunk stood in mute reproach until 1895 when local lumberjack William Willoughby was hired to fell it. People came from all over to collect wood chips as souvenirs as El Aliso was hacked into firewood, which was then sold. A young boy, Charles Gibbs Adams (1884-1953), later the designer of the Virginia Robinson Gardens in Beverly Hills and co-designer of the Los Angeles County Arboretum & Botanic Gardens in Arcadia, counted the 400 rings on the stump.

The old aliso (sycamore tree) was on the site of the Maier & Zobelein Brewery. It was a landmark from time immemorial when Los Angeles was a mere pueblo. It had been venerated by the local Indians for generations as a guide point and was said to have provided shade for the early Spanish settlers and a campground for General Fremont when he wrested California from the Mexicans. For some years Maier had wanted to remove the tree in order to expand the brewery. Zobelein was very emotional about the old landmark and succeeded at one point in having the brewery built around it. Eventually, branches fell and damaged a building. Finally the old tree died. Maier said, “That tree has cost us already about $8,000 all on account of Mr. Zobelein's sentiment.” Finally it was chopped down. Various persons took turns, but “Mr. Zobelein has felt too mournful over the fate of his old pet to strike any of its death blows.

According to Nathan Masters article @KCET, the tree's location was 153 feet north of Commercial St and 88 feet east of Garey.

One last shot of El Aliso in this 1850 aerial taken from a balloon. It's on the right surrounded by El Aliso winery.

(NOTE: This article lifted more or less in its entirety from this post by the amazing Tongvar2 on SkyScraperPage.com's utterly fantastic time suck "Noirish Los Angeles". Don't start reading it, kids, it's more addictive than crack!)